Spain in Easter time is steeped with tradition and religious festivities. What some people perhaps don't know is that it's also a time to make panades, an unmistakable Easter staple on the Mallorcan dining table. The origin of the humble panada is a bit blurry, some claiming it's Jewish, others Muslim and of course it could also be Christian, what's for certain is that nowadays it is tied in with the Christian festivities of Easter and the recipe includes lard and pork. Generally a large batch of panades is made and eaten during the Easter weekend and some frozen for later in the year, if they don't get devoured first 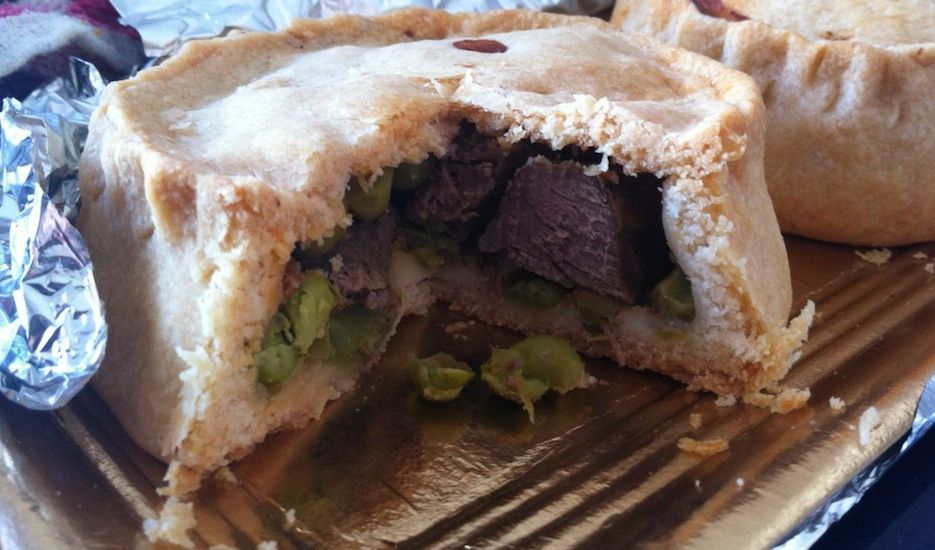 The filling of peas, lamb and sobrassada

This simple meat pie takes advantage of the spring lambs, authentic Mallorcan sobrassada that was made during this winters matances and fresh garden peas. The making of panades is an event in itself with the ladies in the family getting together during the Easter weekend to roll out the pastry and fill the pies. Each town has their own style of hand raising the sides of the panada and curling the rim, with a keen eye one could tell in which town each pie was carefully created. 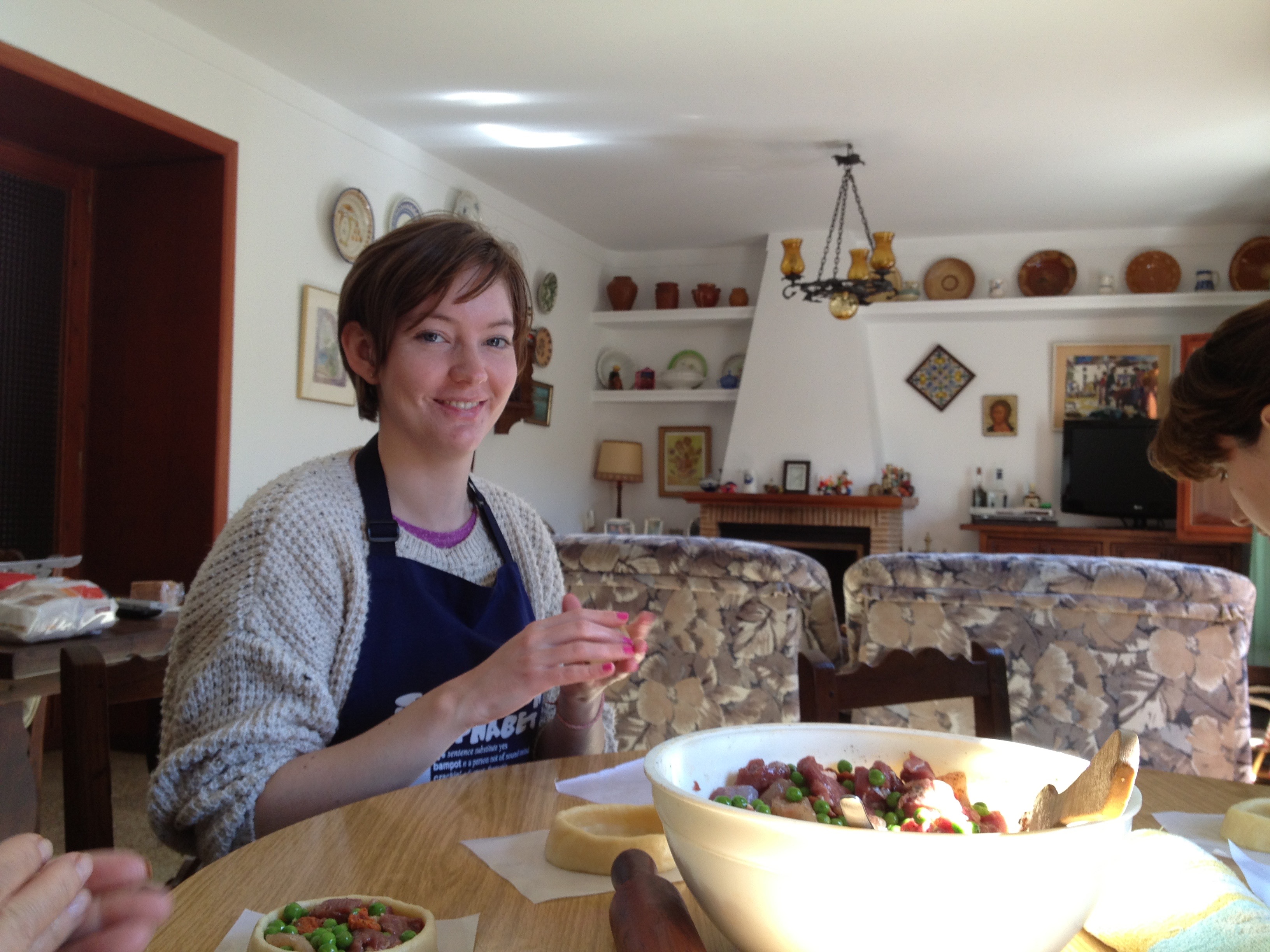 Plenty of panades to make a full mornings work

The glory isn't completely taken by the panada, it's also a time to make crespeis and rubiols (my absolute favourite). Personally I think it's a crying shame that the delicious rubiols are only made at Easter time as this is a sweet pastry I'd happily eat year round. The crespeis can be likened to a shortbread biscuit but softer and made with lard rather than butter. A rubiol is a half moon shaped parcel filled with either strawberry jam, pumpkin jam (angel hair) or chocolate spread. The strawberry jam ones are my favourites. Both are then sprinkled with a dusting of icing sugar. 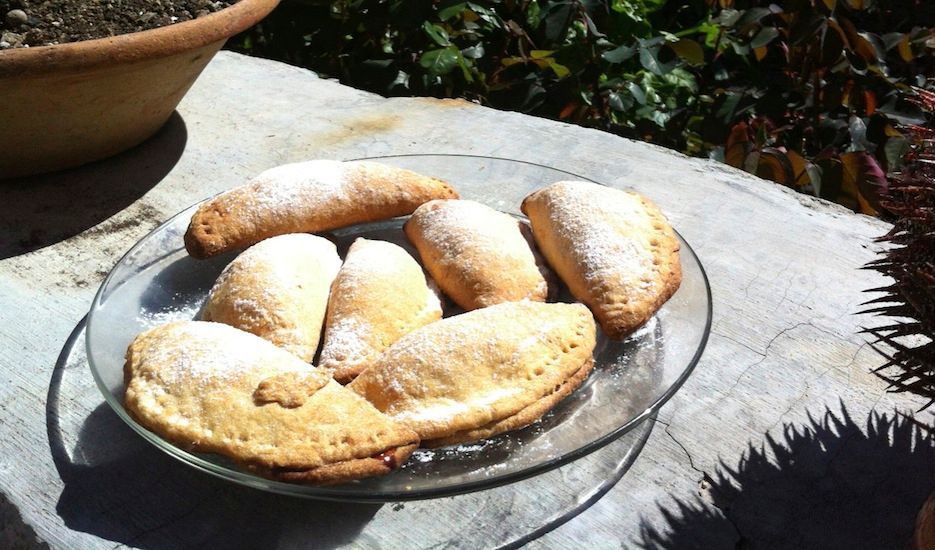 The best part about all this is getting together with the family to indulge in a pie or two. If you'd like to try to make them yourself, here's a basic recipe.


Time: 40 minutes in the oven plus prep

In a bowl, mix together the lard, oil, water and flour and add a dash of salt. Mix together until it forms a soft dough.

In a separate bowl, mix together the diced lamb, sobrassada and peas. 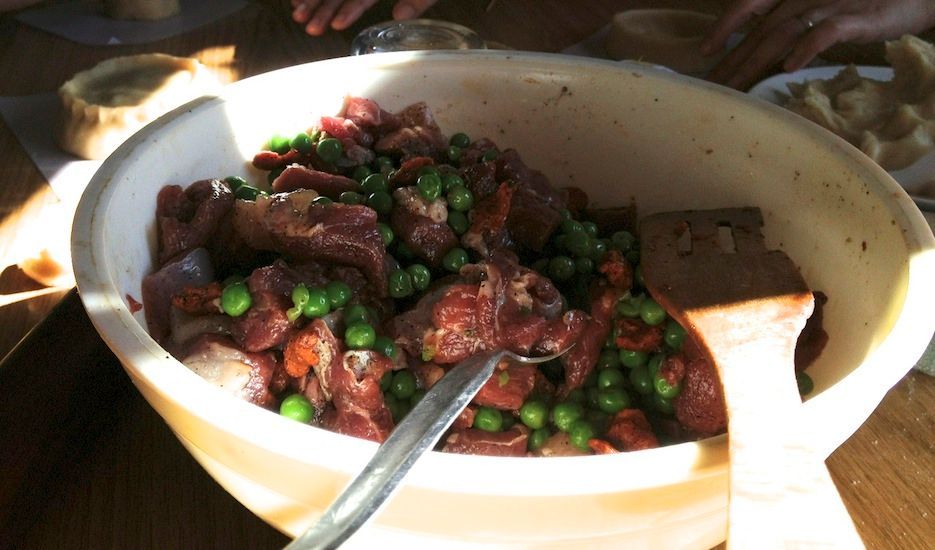 Take about a golf ball size of dough in your hand and roll it into a ball. Gently push it flat and start to work the sides up to form a casing for the filling. 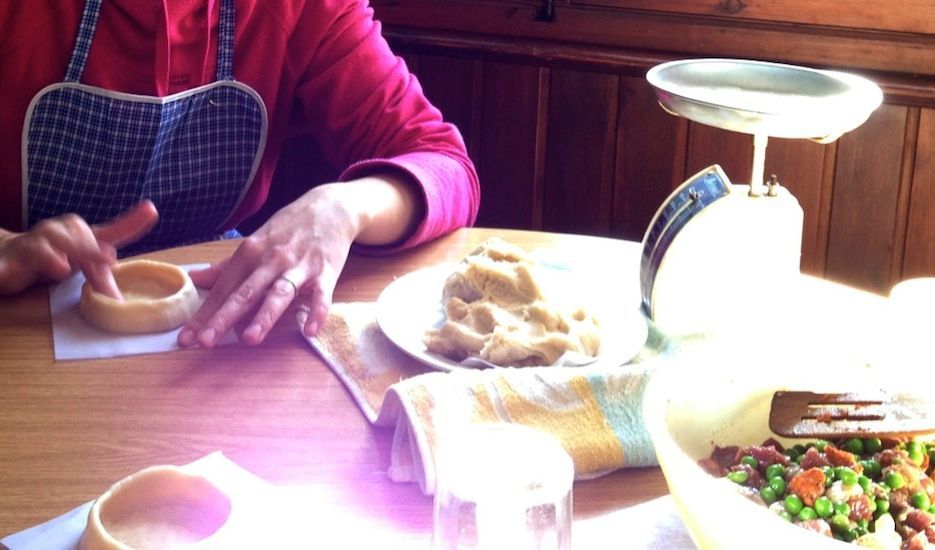 Add enough filling to reach the top of the sides. Take slightly less dough to make the lid. Roll it flat and cut with a knife to make it round. Top the panada and press together the sides and lid of the pie together. 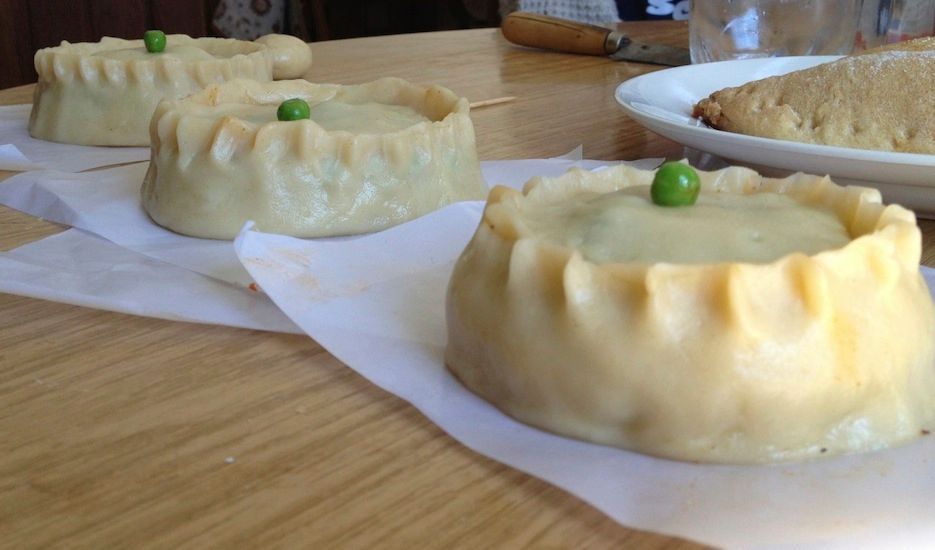 If you want to make two types, panades with peas and some without, pop a pea on top of the ones that have peas inside to tell the difference. Remember that when making pastry cold hands are always best.

Put the panades on a baking tray covered in aluminium foil so the base doesn't burn. Put in a pre-heated oven for 40 minutes at 200ºC. 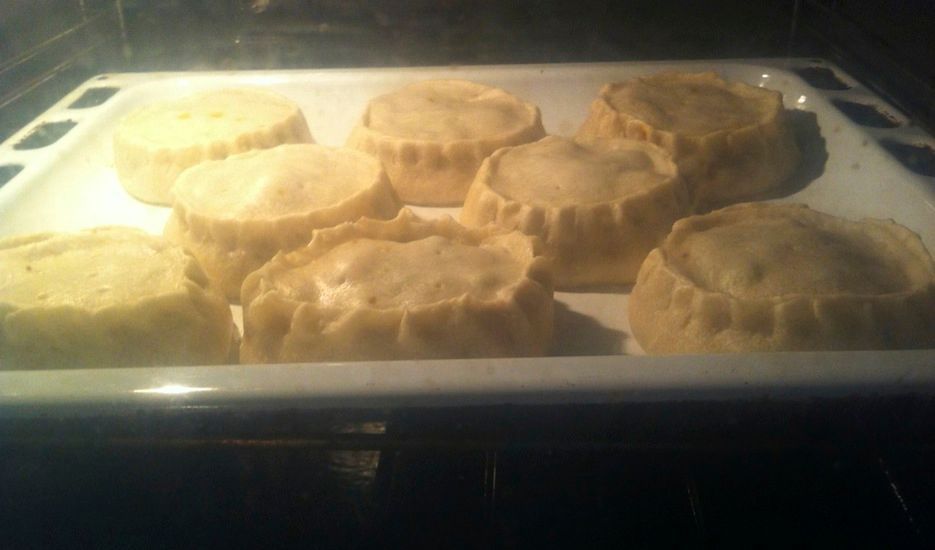 Leave the panades until they've cooled and then enjoy!


If you don't have time to make them yourself then fear not, they are available in all bakeries and supermarkets across the island. 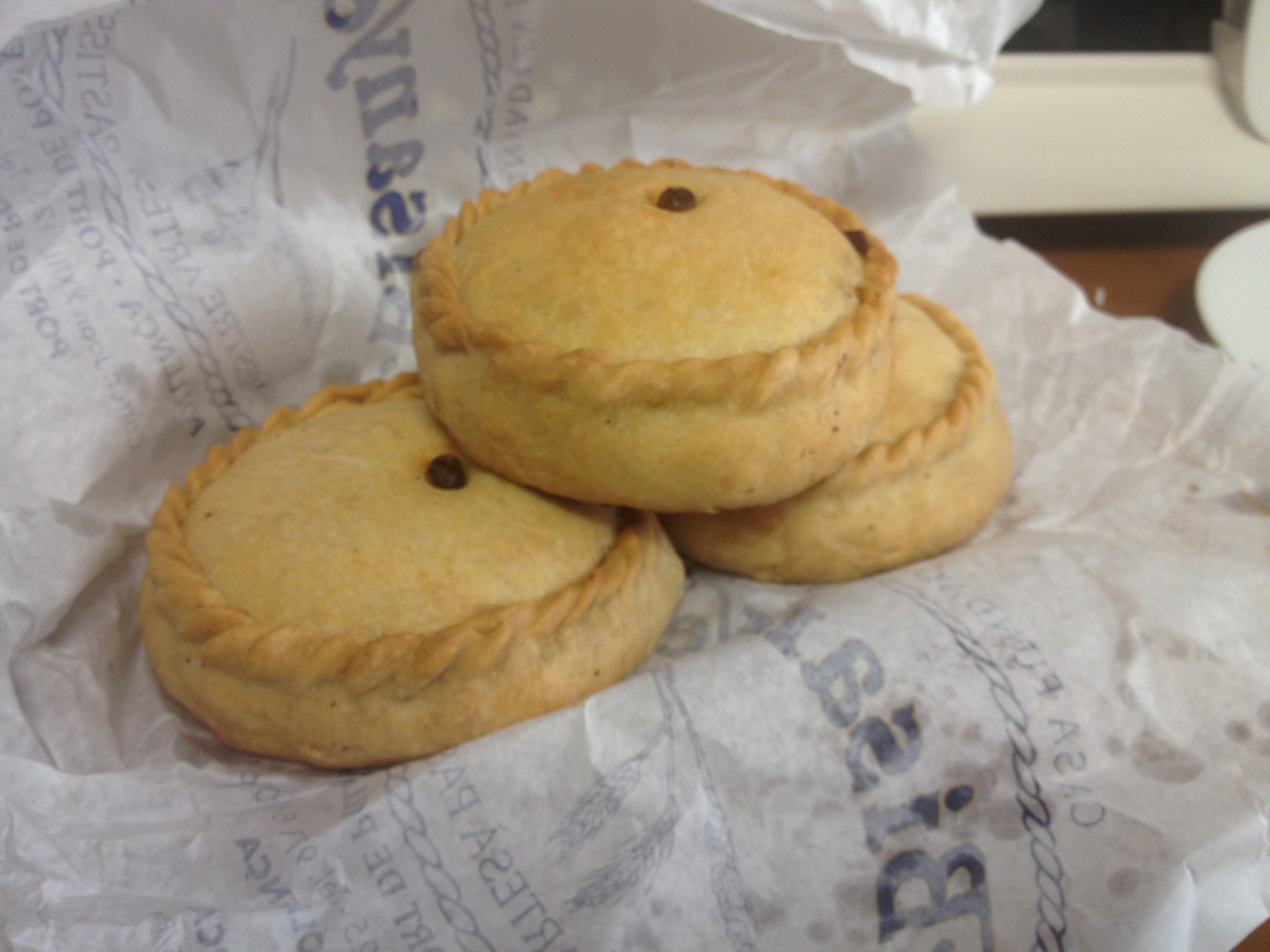 Restrictions return to the Formentor Peninsula